“Before starting at Nativity Prep I didn’t know of anyone that graduated from college”, shares Adrian Alcazar, 2012 Nativity Prep graduate. “Nativity provided an opportunity for me and my family and stood beside me until graduating from UC Merced with a degree in Business Management and Economics in 2020”.

Adrian’s father, a Chef at a La Jolla facility for military veterans, and mother, who cleans commercial buildings, wanted their son to graduate college so he would have greater opportunities in life. They witnessed the impact Nativity Prep had on their nephews, who graduated from Nativity Prep a few years earlier. Adrian recalls, “From day one, we were all so grateful for the opportunity. It seemed too good to be real. I believed in myself, I just didn’t know college was an option until I started at Nativity in sixth grade. Ever since, my family and I have done everything we can to make Nativity Prep proud.”

“When my parents made the decision to enroll me, I was a bit overwhelmed as I knew Nativity had super high expectations. But, Mr. Solis, Mrs. Alvarez, and Mr. Sullivan believed in me and taught me study habits and organizational skills that I continue to use to this day. They also taught me that you get out of life what you put in”, shared Adrian. During his middle school years, Adrian also grew in his faith life. “Before Nativity, I would attend Catholic Mass, but didn’t understand it. Ms. Cardenas taught me the meaning behind each portion of the Mass, why we celebrate it; and how being a person for others is not only important work, but it’s very rewarding.”

Thanks to his academic diligence and family support, Adrian excelled at Nativity Prep. He earned a high school scholarship funded by Nativity to attend Mater Dei Catholic High School. While at Mater Dei, Adrian played on the varsity soccer team (starting as a Freshman) and was involved in Campus Ministry, the Chess Club, the Ping Pong Club, and would often return to Nativity as a volunteer tutor.

Adrian remembers the constant support from Nativity Prep’s Graduate Support Program during his high school years. “Nativity was family, so coming back to campus was something we all looked forward to. Looking back, I now appreciate all that Mrs. Xochitl Alvarez did for us. She set us up to not just get into college, but to excel. One aspect of the Graduate Support Program that had a significant impact on me was listening to the panels of Nativity Prep alumni that were currently in college. They would share their experiences about college, the fun they had and the challenges. They made college seem so real to us.”

When the time came to apply to colleges, Adrian wanted to stay close to home, but Mrs. Alvarez, and Adrian’s Nativity middle school mentor, Bill Bacon and his wife Carla, encouraged him to get away. “Mr. Bacon took me on a college road trip to Cal Poly San Luis Obispo. It was there that I realized getting out of San Diego was something that would allow me to grow even more. I ended up choosing UC Merced, as it had everything I was looking for. Believe it or not, there were three of us that all graduated from Nativity the same year that all chose Mater Dei, then went on to UC Merced together. We were academic brothers. Angel graduated with me in 2020 and Julio left UC Merced due to financial reasons, but is in the process of applying to UC San Diego to pursue pre-med.”

Adrian didn’t waste any time jumping into all that college had to offer. He joined a professional business fraternity (Delta Sigma Pi), tried out and made the men’s soccer team but opted to play intermural instead, so he could focus on academics, worked as a supervisor in events management to help with income, attended mass and young adult ministry, and made sure he excelled in school. Adrian was part of a cohort of Nativity Prep alumni attending UC Merced (10 students at its high). Xochitl Alvarez, Nativity Prep’s Director of Graduate Support says, “Adrian was one of the leaders of the group. He made sure the Nativity Prep cohort would get together from time to time on campus. When new Nativity Prep students enrolled at UC Merced, Adrian made sure to welcome them onto the college campus. He’s a natural leader.” And over the summer breaks, Adrian always came back to Nativity’s campus to visit and participate on the college panel for existing Nativity Prep high school students. “I wanted to pay it forward for all the younger students. I knew if I could do it, so could they.”

Though Adrian couldn’t walk at his graduation due to the pandemic, it didn’t stop his family from celebrating. “We were all in tears, including myself. I was so proud.” Thanks to his personal network within his business fraternity, Adrian interviewed with a number of organizations, ultimately choosing Sherwin Williams for its management training program. After training at three different stores, and multiple divisions, and attending a number of outside sales calls, Adrian started as an Assistant Manager in Modesto.

“I love managing and motivating people. I’m a leader, even for workers much older than myself. We have a lot of fun working creatively to reach our short and long-term goals. I plan to gain experience in the stores, then move on to become an outside Sales Executive, then District Manager.”

We couldn’t be more proud of you Adrian, congratulations and enjoy the fruits of your labor! 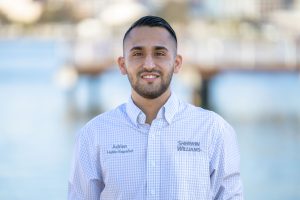 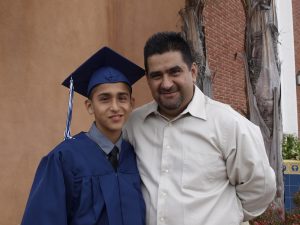 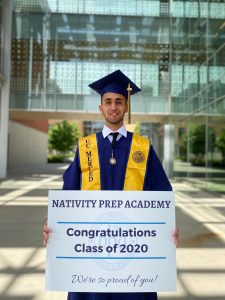