Nativity Prep is excited to share the first of many “Where Are They Now?” alumni spotlights. In this edition, we’re thrilled to share the story of Melyna, who was part of Nativity Prep’s class of 2009. These stories will capture the 11+ year journey our students make from middle school to high school to college and, in Melyna’s case, to graduate school. After graduating from Nativity Prep in ’09, Melyna went on to the Academy of Our Lady of Peace, then to Creighton University, where she graduated with a Health Administration and Policy degree, and is now one semester into earning her Master’s Degree in Public Health Administration. Her life journey thus far is similar to many of our students, in that she had the will, but lacked the financial means, to pursue higher education. 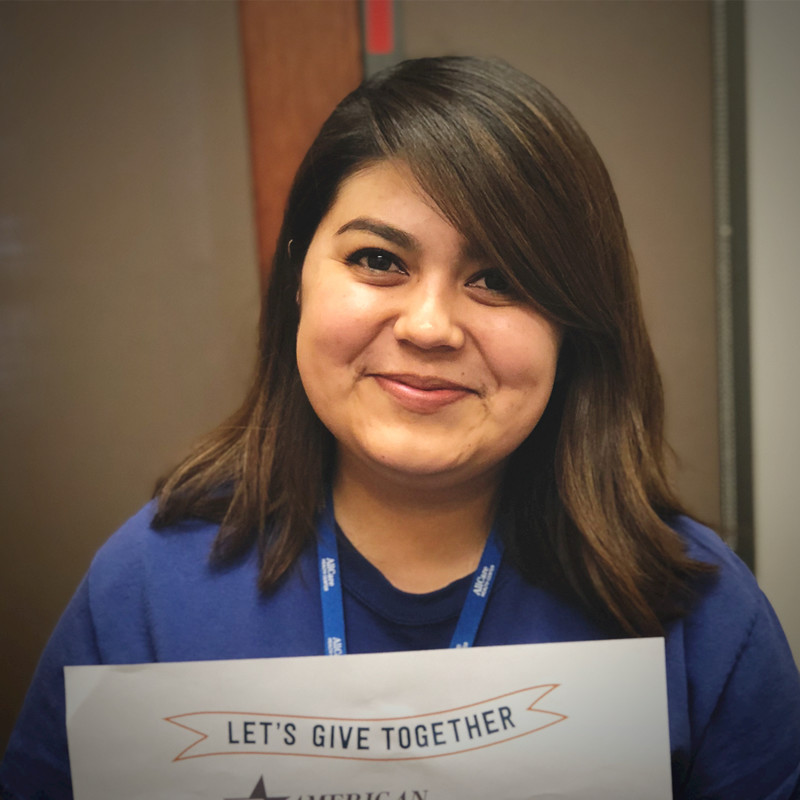 Melyna is the first of seven children. Her father works in construction and mother as a janitor, so she witnessed grit, sacrifice, and family teamwork firsthand. Melyna’s parents were crystal clear with their children from an early age. They wanted a better life for them and they knew that, with hard work, all of their children could graduate college and pursue meaningful careers, all while being persons of character.

Melyna first learned about Nativity Prep while attending The Barrio Logan College Institute, an after school college-prep program. The staff at Barrio Logan College Institute saw her potential and recommended she attend Nativity Prep. Her parents committed to Nativity Prep’s extended school day and year, challenging curriculum, and college-bound culture, in a decision that would change the course of their family forever. They also felt that Melyna would benefit from the values and encouragement that Nativity Prep could provide as a private, Catholic school.

As a graduate looking back, Melyna shared, “Although I did not fully realize it at the time, my years at Nativity Prep provided me with the study habits and character formation to succeed along my journey to college graduation.

Nativity expected me to attend college. They made it feel attainable. I just needed to put in the work.” She adds, “I loved Nativity because we were a small community, a family, where every student received individualized attention. They allowed me to open up and be myself.”

“My years at Nativity Prep provided me with the study habits and
character formation to succeed along my journey to college graduation.”

Knowing Melyna’s confidence, inquisitive mind, and proven academics, Nativity Prep’s Graduate Support Program matched her with the Academy of Our Lady of Peace
High School (OLP) as the next step in her education. As part of Nativity Prep’s 11-year commitment to its students, the school provided Melyna with a four-year scholarship to attend OLP.

In exchange, Melyna agreed to maintain a 3.3 GPA and attend Nativity Prep’s weekly Graduate Support classes and workshops. It was in these weekly classes, that Melyna received social and academic support and coaching during her critical high school years.

Melyna states, “I didn’t know too many girls at OLP, which made me a little nervous. Having NPA’s Graduate Support Program made the transition to OLP much easier.” Melyna thrived at OLP, where she was active in the Cinema Club, the Arts Society, and volunteered in the community. Her 3.7 cumulative GPA and high ACT/SAT scores earned her admittance and scholarships into a host of colleges and universities across the United States. 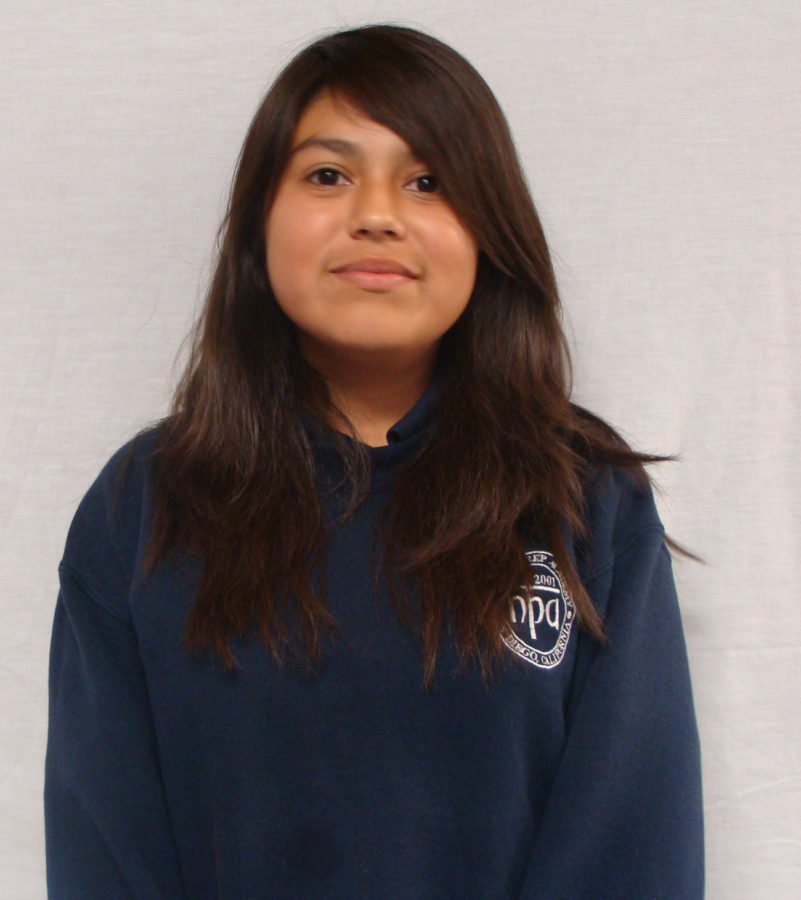 Given her exposure to the Jesuit tradition at Nativity Prep, and the service oriented community at OLP, Melyna knew she wanted to attend a Jesuit college. Since Creighton University offered the best scholarship and financial aid package, Melyna was off to Omaha, Nebraska.

Melyna didn’t know what to expect when she first decided to take a leap of faith and attend a school half way across the country from her family and friends. Looking back, with a huge smile on her face, Melyna shared, “I loved Creighton, I wish I could do it all over again.” While at Creighton, she served as the president of her sorority, Sigma Lambda Gamma, which focuses on promoting the benefits of cultural diversity, and she joined the Latino Club.

“I always wanted to earn enough money to live comfortably,
take care of my family, and give back to NPA.”

During her senior year at Creighton, Melyna interned with the regional nonprofit health system, All Care Health Center.

I worked as part of the social services team, helping to give medical and dental access to all those who need it.” All Care Health Center was so impressed with Melyna’s work and passion for their mission, they offered her a permanent position after graduation. Today, she continues to work with the social services team and picked up the added responsibility of being a liaison between the Board of Directors and the rest of the organization. “It’s a lot of responsibility but I am excited to make a difference,” she said. 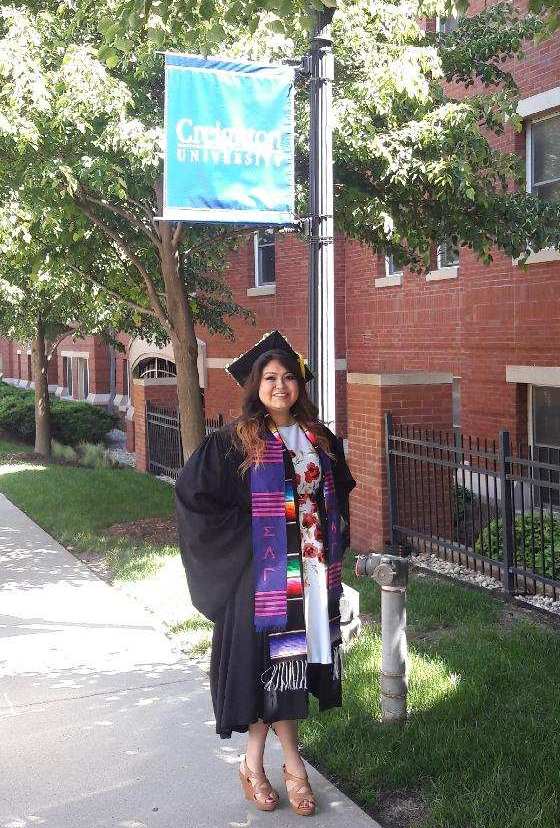 Today, Melyna’s academic ambition continues. She is currently one semester into a three year program to earn her Master’s Degree in Public Health Administration at Creighton University.

Melyna states, “I always wanted to earn enough money to live comfortably, take care of my family, and give back to NPA. I hope to someday donate money to buy better computers for the school. For now, however, I am following my passion to open up access to healthcare to more people.” Reflecting back on the impact Nativity Prep had on her life, Melyna shared, “As a young middle school student at Nativity, I didn’t realize the incredible support system I had. Now I realize that Nativity always had my back, and stuck to their commitment to seeing me through graduation. I hope that my younger brothers and sisters will see what’s possible, and work hard to find the path that allows them to use their talents to help others.”

During this time of Thanksgiving, we’d like to thank all of our generous sponsors, like you, for enabling Nativity Prep’s mission to continue so we can serve young men and women like Melyna.

Nativity Prep Academy is a private-independent, tuition-free Catholic school for young men and women who represent the first generation in their families to graduate from college. Our programs support more than 230 students in San Diego over the course of 11 years, from middle school through high school through college.