Moises Morales, Nativity Prep class of 2014, had tremendous examples of faith and fortitude in his two parents. His father, Pablo, immigrated to the United States, alone, when he was sixteen, to pursue a better life for himself and his future family. Pablo found a job painting cars, a job he still holds to this day. Pablo met his wife, Maria, a housecleaner, at an English class a few years later. Moises shared, “My parents are both extremely hard working and optimistic. They knew there was a tremendous opportunity for their children, they just needed some guidance. Looking back now, it was Nativity Prep that had the greatest impact in changing the trajectory of my life, and in large part, my family.”

At first, Moises was not excited to enroll at Nativity Prep, as he knew the extended school year and days would be challenging. “It didn’t take more than a few days to realize that Nativity Prep was different than other schools I attended. I was surrounded by teachers that cared for me like a parent, and fellow students that wanted to graduate college.” shared Moises. Mrs. Power, who taught Moises in middle school, shared, “Moises was always so curious. He was never afraid to ask how to do something, even if no one else seemed interested at the time. This helped him to grow and learn and share so many gifts with other students.” John Edgerton, Moises’s middle school Mentor, said, “From the first day we met it was all systems go for Moises. Hard-working, goal-oriented, and determined. He is a credit to his family, to Nativity, and to himself.”

Moises was the only student from his eighth-grade class to enroll at Cathedral Catholic. However, his involvement in extracurricular activities, such as volleyball, campus ministry (where he was in charge of multiple retreats), Student Ambassadors, and the Treasurer of the Latino Club, helped him make friends. “It was a bit of a culture shock when I started at Cathedral, but I felt comfortable, safe, and that I was where I should be. And coming back to Nativity Prep’s weekly high school workshops was a highlight of my week, as I was surrounded by my closest friends that were on the same journey. And anytime I was close to derailing at Cathedral, Mrs. Alvarez (Nativity Prep’s Director of Graduate Support) would always sense it and make sure I stayed focused and would boost up my confidence.” stated Moises.

In addition to graduating from Cathedral Catholic with a 3.7 GPA, Moises worked all four years during high school, and often full-time during the summers. “During my freshman year I decided I wanted to move ahead in math, so I inquired about taking geometry during the summer session. When I learned that summer class would cost $1,000, I approached Cathedral’s Facilities Director to see if I could work for him over the summer to offset the cost, and he said yes.” shared Moises.

Moises’s stellar resume and academics helped him gain acceptance to USF, LMU, LaVerne, CSU San Marcos, and SDSU. “I chose San Diego State as it had an accredited business program and it would allow me to live at home, saving on expenses. I was financially independent the day I graduated from high school. My parents had sacrificed a lot for me, so my independence enabled my parents to focus on my younger sister, Jessica (now an eighth-grader at Nativity Prep).”

Moises’s work ethic continued while in college, working full time all four years. As a freshman at SDSU, he landed a job working in sales at the cellular phone company, Spacetel. He only worked at the retail site for two months before he was promoted to be the interim Assistant Manager in charge of Operations for the San Diego region. Soon thereafter, Moises was promoted to oversee all of the operations for Spacetel San Diego, which was a full-time position. And there was no break during the summers, as he always took summer classes at Mesa Community College to ensure he graduated in four years.

Though Moises didn’t have much free time, he made it a priority to join two professional fraternities, Beta Alpha Psi, Honors Accounting, and Alpha, Latino Accounting. And, Moises was a consistent presence at Nativity Prep. Moises shared, “I wanted the younger Nativity Prep students to see themselves in me, so I attended all of the summer Graduate Support panels. I’d share my stories and insist that they could succeed at the college level. I also helped out at fundraising events, like the annual Golf Classic and Wine & Craft Beer event. I went out to lunches with donors, and was the guest speaker at a small dinner for select donors.”

Moises just finished his fourth year in the 4+1 BMACC program at SDSU. In 2023 Moises will graduate with both a Bachelor’s (4) and Master’s degree (1) in Accountancy. Moises is currently working as a full-time audit intern at the accounting firm, RSM. “My long-term career aspiration is to become a partner at RSM, followed by a CFO position at a large organization.”

Reflecting back on the past 11 years, and the benefits of being a college graduate, Moises shared “My parents always knew there were opportunities in the world, they just didn’t know how to get there, and Nativity was a big part of the answer. Due to the sacrifice my parents made, they see the world through a somewhat narrow lens. I now have the opportunity to open my parent’s minds, to show them all the culture of San Diego. I enjoy taking my parents to new restaurants, shows, parks, and museums. It’s a blessing.”

We know that Moises’ sacrifices will continue to pay dividends for himself, his family, and the countless Nativity Prep students under his wing. The faculty and staff of Nativity Prep hope to see Moises join the Board of Trustees in the not-too-distant future. 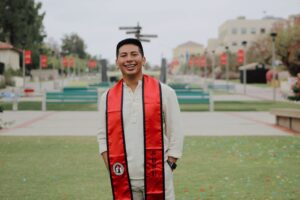 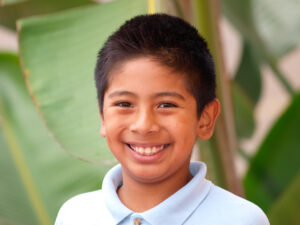